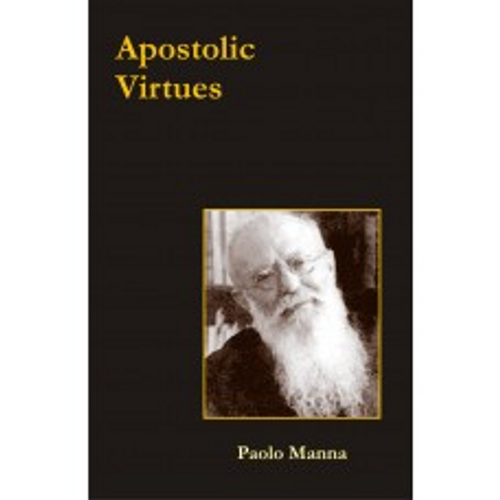 "Without faith the missionary has no reason to be." ~Blessed Pablo Manna, P.I.M.E.

From his desk in Milan, the veteran missionary Father Paolo Manna wrote stirring letters to his conferes in the mission fields. He does not fill the pages with method, pastoral planning, or details for implementing new programs. Rather, he speaks to the primacy of the spiritual life of missionaries, exhorting them to embrace the great virtues which must characterize all who answer Christ's call to "go to the ends of the earth." He writes with the boldness and ardor of a soul who has loved Christ so deeply as to be consumed with the zeal to bring that love to every soul at any cost. He lays out the spiritual plan of how to become co-workers with Christ's redemption and to live the spirit of Jesus Christ so as to way with Saint Paul "for me to live is Christ." In the circular letters compiled in Apostolic Virtues, the words of Father Paolo Manna continue to encourage and renew the missionary zeal of the Catholic Church in the 21st century.

"Jesus is the author of salvation, and we--as unworthy as we are--have been given the mission of bringing the salvation to souls: we are missionaries of redemption, and to us has been entrusted the sublime duty to effect and complete that ineffable mystery of universal salvation; to us has been given the mission to bring Jesus Christ to those who do not know Him, to wash them in His blood, to enrich them with His merits, to extend the blessed Kingdom of God to the whole world."  ~Blessed Paolo Manna from Apostolic Virtues

Paolo Manna (1872-1952), born in Avellino, Italy, was sent to Burma after he became a missionary of the Pontifical Foreign Mission Institute (P.I.M.E.). Over the next twelve years, he returned to Italy three times for serious medical reasons, the last time, to his great sorrow, to remain there. Thus, he discovered God's will for him: to make him, through his writings and publications, a missionary animator of the whole Church--the missionary of the Mission. The aim of his work was not only to announce the progress of faith in the world and to help missionaries with prayers and offerings, but above all to make everyone aware of their duty to increase the number of missionaries and local clergy, so that the Church would be able to carry out its mission to the full. As director of the magazine "Le Missioni Cattoliche" and particularly with his first work "Missionari autem pauci" (The Missionaries are Few), he brought about a real surge of enthusiasm for the Church's worldwide Mission and a large number of missionary vocations. He was beatified by Pope John Paul II in 2001.